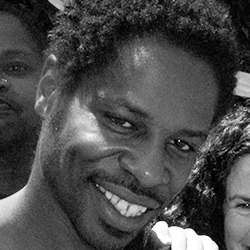 A strange thing happened to me one night
As I watched the moon shed its light
A star came up to me and said
I know of waves rolling in your head
I see the life you’re living, do you know of a star within
I can see that you’re troubled, and your life is just beginning

The brilliant star looked at me and said
Don’t go straying in the valley of the dead
The answer you seek is planted within
And if watered with wisdom good fruit it will bring
What’s sown by mankind, they’ll be reaping
It’s only a matter of time and soon I must be leaving

Suddenly the star was gone, I realized it was almost morn
The star I did not see, but I was feeling it was watching over me

Anger Is A Black God

Anger is a Black God…The Father…
who with heart torn…broken;
hears the interminable cries
of prodigal sons and daughters.
Descendants of lost souls…long lost dark souls.
Souls abandoned to drift…aimlessly floating…
Many to be drowned beneath the turbulent waves
Or remain suspended in the Middle…
Of time’s mournful Passage…,
Seeking the prophetic, yet remote, shore
Of Martin’s dream…”The promised Land”.
Yes!…Anger is a Black God…

As He walks amidst the stifled screams
of still darker souls…souls imprisoned;
locked behind the cold inhumane steel jaws,
waiting to be slowly consumed within…
Deep within the voracious, impenitent bellies
of beastly…concrete slave-ships.
Where silent and solitary tears, burn faces black.
And…anguished black hearts, grieving
The distant hopes, and fleeting dreams,
of a regal nation…once proud, strong and righteous,
beat to the rhythm of Marley’s “Redemption Song”.

Yes!…anger is a Black God…

Who sees, feels, and hears the voice
of “Able”…his chosen,
while shackled and chained,
to chemical rock formations,
crying out from the blood soiled streets
of a so-called “Free Land”.
Where the “Cain” raised crops…
of greed, pleasure, and violence are harvested,
to the prevalent chant of “twin” un-spirituals…
“I’m Not My Brother’s Keeper and…I’m Just Doing Me”.

So…should you be moved to ask the question that is so plain to see.

Yes…anger is a Black God…a God that is Black like me.

Woven within “Greed’s” scarlet web
Of corruption, schemes and misinformation
The delicately balanced fabric of life,
Fades into the dark shadow of death. Suffering, anger and chaos,
The common threads that bind the masses
Becomes the “rallying cry” of the deprived

cower behind poison “Ivy League”
covered walls of “Gated Communities”
Feasting like fiends, they gorge themselves
On the flesh and blood of the poor